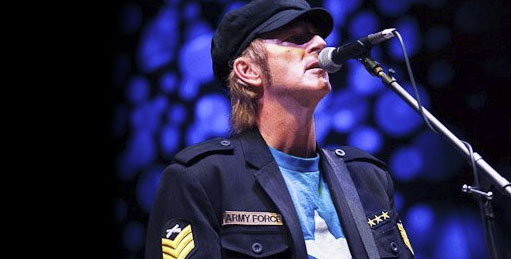 Lannie Flowers is a standard bearer for the Power Pop resurgence currently taking hold across the world. Combining diverse influences such as British invasion, punk rock and glam rock, Lannie puts forth guitar driven melodies that are at once fresh yet familiar.

Also known as “Cowtown” and Gateway To The West,” Fort Worth, Texas in the mid-1960’s was an incredible hot bed of talent.

The “Teen Scene” phenomenon that sprang up in and around Fort Worth, Texas started with “Teen A Go Go” located at the Round Up Inn at the Will Rogers Memorial Center. It’s popularity resulted in satellite locations known as “Action A Go Go” and “Holiday A Go Go” – all in Ft. Worth.  Events were sponsored by KFJZ Radio and MC’d by a host of KFJZ radio disc jockeys, among whom Mark Stevens was most prominent. This synergy led to a vibrant radio presence all through North Texas that influenced and yielded many musicians, bands and out and out rock stars.  In the movie “Teen A Go Go,” industry critics mention that “though Dallas and Seattle both had great bands, the quality of music from Ft. Worth was just better.” Notable names from this era are Courtship, Delbert McClinton, Bloodrock, John Nitzinger, Buddy Whittington, and Larry and the Bluenotes.

Lannie Flowers grew up in a little rural community one mile from the Fort Worth city limits and exactly 15 miles from “Teen A Go Go.” The essence of Lannie can be captured in this quote from 1986 – “The two most import things in my life when I was growing up was The Beatles and the Dallas Cowboys.” He began to play guitar in 1968 and formed a band in 1969. Three years later, he founded The Pengwins with some friends from Kennedale High School. They played covers of The Beatles, Grand Funk, CCR, and Alice Cooper in living rooms, garages, parties, and dances for sometimes adoring adolescents in the Fort Worth area of Texas, all the while dreaming of bigger stages and always adoring adolescents. Unlike most other nascent rock n’ rollers, Lannie started writing his own songs. Over the next five years, the lineup remained relatively stable.

During his early touring years, Lannie played the infamous Jacksboro Highway on the north side of Fort Worth.  Many country and western bars would bars would try rock and roll on Thursday nights and The Pengwins actually performed behind chicken wire on several occasions. One club required them to play “at least a few” country songs and Lannie came up with a Buck Owens medley that he still remembers and occasionally performs at his acoustic shows.

Then Lannie saw the New York Dolls in Dallas in 1975. The Ramones released their first record in 1976 and the second British Invasion hit in 1977 – Pistols/Clash/Jam. Mash this up with his earlier influences and now you’ve got the distilled version of Lannie Flowers.

In 1977, Disco (sucks) and Urban Country were commanding the airwaves, but Lannie and his Pengwins had grown in the opposite direction. Heavily impacted by Badfinger, Raspberries, Big Star, David Bowie, The Stooges, and Mott the Hoople, The Pengwins paved a different path out of the local Texas soup of blooze and booze music scene. The band that started getting out of town gigs in bars and frat houses all over in Texas, Oklahoma, and Arkansas. Their set list gloriously blended FM radio hits with Glam, Punk, and New Wave, and they bravely marched on, in spite of the pabulum the masses were currently consuming. Along the way, this burgeoning band of brothers opened for The Drifters and The Guess Who, and surrendered the Mother Blues stage to Thin Lizzy, who had stopped by for an after-hours set.

“Life After High School” was the first recording released by The Pengwins. Pressed as a 7” 45 RPM single with 2 other songs (Life After High School plus Look Around and It’s a Dream), it had a small LP sized hole in homage to the singles coming out of the U.K. at the time. It was released on Fabb Records, where “Even if it’s not a hit, it’s a Fabb Record!” In retrospect, Life After High School is a near perfect vinyl slab reflecting a coming-of-age, life stage summation and launching pad for the future – both for the song’s narrator and the band itself.

In their initial 15 year career, The Pengwins garnered significant attention from such seminal music icons as Rick Derringer and Jim Dickinson (famed producer of Big Star and The Replacements), both of whom produced later recording sessions for The ‘Gwins. The band re-formed in 2005 and have been recording and playing select venues since that time.

When The Pengwins, quit touring in 1992, Lannie not only continued writing but he had a backlog of songs recorded on 4 track tape. When faced with the daunting task of finding a permanent storage facility for all those hundreds of old demos and half finished songs in his studio in Kennedale TX, Lannie decided to create the ultimate homage to those old tapes and his music – 36 individual melodies or one all-inclusive song –  it’s up to your interpretation.

Released in 2008, “Same Old Story” is a 45 minute pop music collage. From the first glance, through all the struggles of young love, to the inevitable end, Lannie’s delivery is a refreshingly new perspective on the “Same old story, you know the one you’ve heard so many times… the same old story, except this time the story’s mine”… The music was so good, former Pengwin lead guitarist Alan Petsche signed Lannie to his record company and created a label, SpyderPop Records, anchored by Lannie’s music.

World-wide critical acclaim (not to be confused with fame or sales) followed. In fact, Lannie received so many letters requesting complete versions of songs on SOS that he released “New Songs, Old Stories” to satisfy the demand.

“Circles“ was released in 2011 and featured more captivating power pop – this time loosely addressing the more grown up perspective of what goes through the mind of an rock and roll road veteran with a heart toward true love.

Following the successful reception of “Circles,” winner of LA Music Awards 2013 “Record of the Year,” Lannie released his first live album.  As documented on “Live In NYC,” those who showed up to break the drudgery of reconstruction after Hurricane Sandy were greeted with a solid set of power pop and roll to lift their spirits out of the mire. Drawing from “Circles” and “New Songs Old Stories,” Lannie and the band proudly provided a welcome hook revolution to their guests. He also paid homage to Alex Chilton and his much loved Big Star by performing a faithful rendition of “Back Of A Car,” the first single released from this album.

For the single, Lannie brought in producer Mike Gage to remix and re-master both the live song and a new song, “Best I Can” resulting in a double A sided 45rpm delight.

Lannie first met Nitebob, world famous sound engineer, producer and tour manager, in the late 1980’s and had wanted to work with him ever since. In 2016, the stars aligned and the ever busy Nitebob spent a week in Texas recording at The Cove, Spyderpop Records’ professional studio. The result of their long awaited pairing is a new 45 rpm and CD single, “Kiss A Memory” b/w “Everything A Man Could Want.”

For the next project, Lannie recorded “Home” a group of songs that complete the  thematic arc started with “Same Old Story” and continued in “Circles.” Starting in March, 2018, Lannie decided to release a free downloadable single every month until “Home” was released in November, 2019. Pragmatically titled “March To Home,” this series of singles has been met with lavish critical praise and will eventually be compiled and made available for purchase.

“Home” has received the honor of being included in numerous “Best of 2019” lists and placed in the Top 5 on many of them. Goldmine Magazine named it number one in “Power Pop Plus: Best of 2019”
“Lyrically thoughtful, nuanced, passionate and always melodically stimulating, Lannie Flowers continues his string of top-notch releases with the fabulous ‘Home.'”
John M. Borack, Contributing Editor, Goldmine Magazine

Lannie is also actively involved with “The Pengwins Box Set Series,” installments of sixteen singles featuring an A side from the once and future Pengwins (recorded at Abbey Road studios) and a B side featuring original re-mastered recordings from Pengwins incarnations past.  Each single is released in its own box set containing neat surprises.  Volume 5 is slated for a first quarter 2021 release.